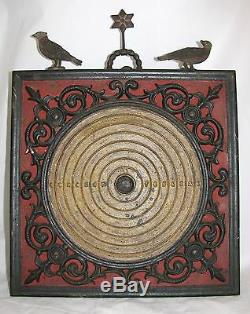 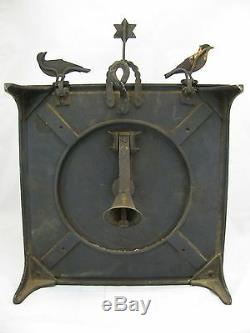 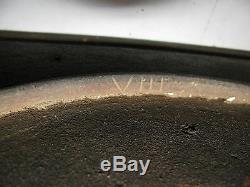 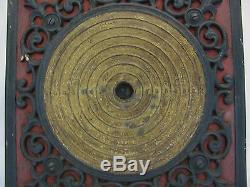 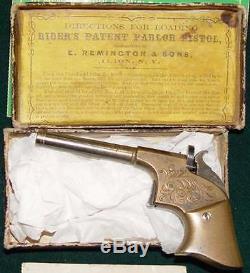 Found in a folk art and Americana collection in New England. It is a parlor pistol shooting target and is in excellent condition with original paint. This is a very rare target used in the mid to late 1800's for target shooting inside, in the parlor. The guns used, both pistol and rifle, for parlor shooting were 17 to 22 caliber and some just used a percussion cap and a lead ball. The bullets would not even penetrate a wall. The condition is museum quality and is a piece of American Folk Art. The target is all cast iron with two birds and a star at the top that would fall over if hit. When the bullseye in the center of the target is struck the bill will ring. Each ring of the center of the target is numbered. It would have hung from a cast iron ring on the back and had feet to keep it away from a wall. We have included in our listing a photo of a very rare Remington parlor pistol. It is not included in the sale but is for illustration purposes only. The target is overall 17 ¼ tall x 13 ¼ wide and 3 ½ deep. The center decorated square is 13 ¼ square. The maker of the target is unknown but we did find the Roman numeral VIII on the back side rim of the target.

This could have been a model number or part number and is original to the target. Like us on face book.

A recent interesting article from the New York Times. A Brooklyn Show Celebrates an Inventive Mind of the Midway JUNE 26, 2014 Antiques By EVE M. KAHN A KING OF THE MIDWAY, AND ARCADE COLLECTIBLES Scholars, dealers and collectors are taking amusement park artifacts very seriously.

A show about William F. Mangels, an inventor of amusement park attractions, will open in September at Green-Wood Cemetery in Brooklyn partly with funding from a Kickstarter campaign that ends on Friday. Organized with the Coney Island History Project, William F. Mangels: Amusing the Masses on Coney Island and Beyond will contain early 1900s arcade games, components of rides, engineering documents and films of park machines in motion. Jeff Richman, the historian at Green-Wood, bought a shooting gallery to display.

Parts of it are temporarily hung on walls at his home. My living room has all these shooting gallery targets, he said.

In 2009, the Colorado collector Richard S. Classic American Target and Arcade Forms, a book by Mr. Tucker and his wife, Valerie, is due in October from Schiffer Publishing.

It illustrates hundreds of targets and has chapters devoted to Mangels and his competitors in the United States and Europe. The Tuckers have identified manufacturers that produced particular varieties of the antiques, which are rarely signed or marked.

Nobody has ever really known who made this stuff, Mr. The couple have also found functioning shooting galleries; one is at the Sandy Chanty Seafood Restaurant in Geneva-on-the-Lake, Ohio, and another turned up in the basement of the Reynolda House Museum of American Art in Winston-Salem, N. The item "Antique Cast Iron Parlor Shooting Target Victorian Era Target" is in sale since Saturday, April 26, 2014. This item is in the category "Collectibles\Historical Memorabilia\Fairs, Parks & Architecture\Circus & Carnival\Other Circus & Carnival". The seller is "olegolfguy" and is located in Campbelltown, Pennsylvania. This item can be shipped worldwide.