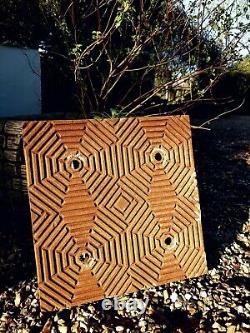 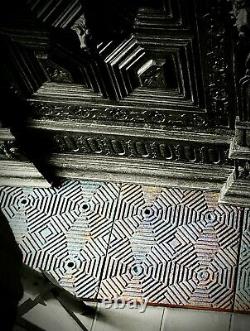 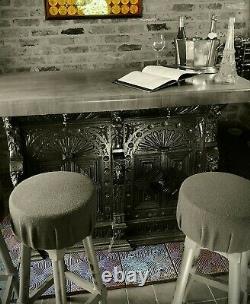 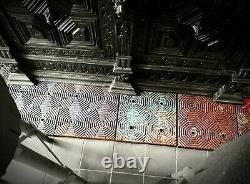 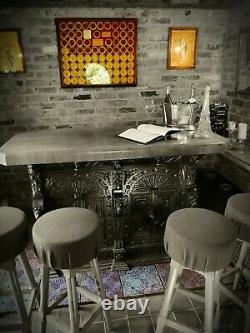 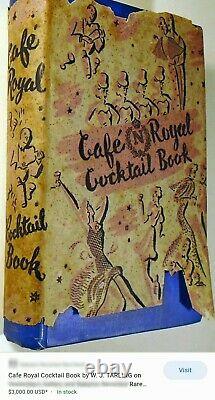 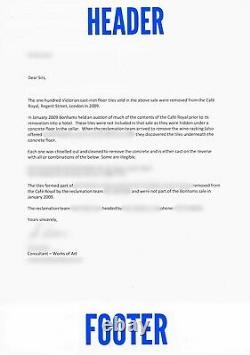 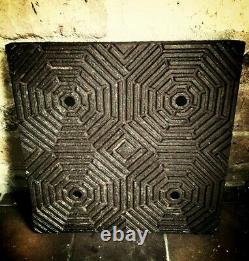 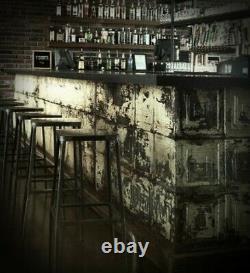 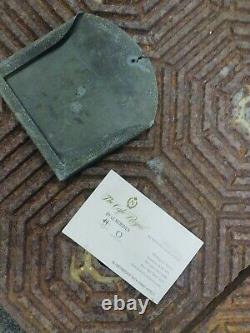 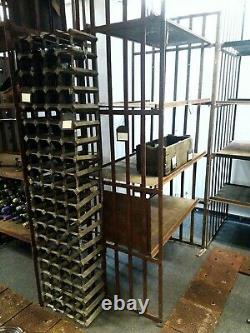 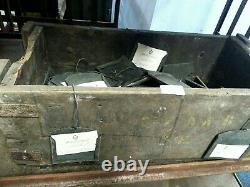 Here's a unique opportunity to own a part of this historic and remarkable establishment for much less! Create a unique vintage industrial chic look at home or work..

Many potential uses other than floor decoration.. Use as cladding or lamp bases, wall sconces etc. Perfect match for our Aesthetic Movement carved oak panelled bar console. Will also be using as light wall sconce backing plates. Unique and with the ultimate provenance from "THE GREATEST WINE CELLAR IN THE WORLD"! 110 late 19th century Victorian cast iron floor tiles reclaimed from THE CAFÉ ROYAL - LONDON wine cellar during the 2009 refurbishment into Hotel Cafe Royal. Decorative tiles in the Aesthetic Movement.. CHRISTOPHER DRESSER /THOMAS JECKYLL style with repeating octagonal maze'finned' geometric patterns surrounding 4 bolt/fixing holes. EACH SALE OF 10+ PIECES WILL COME WITH A COPY OF AUTHORITATIVE LETTER OF CAFÉ ROYAL PROVENANCE.

Image of letter of provenance attached, with obscured details. THE CAFÉ ROYAL wine cellar was widely renowned over many decades since being built and considered as "THE GREATEST WINE CELLAR IN THE WORLD" at one time.. Here's a chance to own part of this heritage. There is a total of 110 tiles which are in salvaged condition, leaving up to the new owner/s how far want to restore of keep a vintage patina etc.

Tile dimensions 12" x 12" x 1 / 30.5cm x 30.5cm x 2.5cm. The establishment was originally conceived and set up in 1865 by Daniel Nicholas Thévenon, who was a French wine merchant. He had to flee France due to bankruptcy, arriving in Britain in 1863 with his wife, Célestine, and just five pounds in cash. He changed his name to Daniel Nicols and under his management and later that of his wife, by the end of the century The Café Royal was renowned as a truly remarkable and original establishment. Early in its history, Daniel Nicholas sent for his cousin, Eugène Delacoste, from Burgundy.

Delacoste had a reputation as an expert in selecting the best appellations and combined his passion with his impeccable palate to handpick each bottle for The Café Royal's wine cellar. This carefully built cellar was at one point widely recognised to be the greatest in the world. Throughout the ages, The Café Royal was the epicentre of fashionable London. Welcoming famed patrons, from royalty and celebrity, to the creative and the notorious, it has been an established and iconic landmark on the capital's social scene, for over a century.

Royalty took to the place, and the Prince of Wales, later to abdicate as Edward VIII in order to marry Mrs Simpson, and The Duke of York, later to become George VI, often took lunch at'The Café', as latterly did Diana, Princess of Wales. The magnetic appeal of'The Café' continued into the mid-20th century. The sexy charm of Brigitte Bardot, the romantic date of the bejewelled Elizabeth Taylor and Richard Burton and unforgettable visits of music and sports celebrities such as Louis Armstrong and Muhammad Ali were all part of'The Café' routine. In 1973 David Bowie famously retired his alter ego, Ziggy Stardust, with a star studded party, dubbed'The Last Supper'. Guests included the biggest rock stars of the time, such as Mick Jagger, Lou Reed and many others. In 1951 The Café Royal became the home of the National Sporting Club, holding black tie dinners before bouts often frequented by Muhammad Ali. The original National Sporting Club founders, the Earl of Lonsdale and the fifth Marquis of Queensberry also laid down their set of boxing rules,'The Queensberry Rules for Boxing' here in 1867. So all in all an amazing place and a chance to own a historic piece associated with this esteemed London cultural and society hot spot. As mentioned at top of description, first time these are available on the open market. Images shown also include that of The Café Royal wine cellar wine racks and bottle identification labels, however just to clarify this listing is for the tiles only. IMPORTANT - PLEASE READ Feel sure don't need to mention re salvaged/reclaimed items, however to be clear just in case.. These are not restored or cleaned up, are in good solid condition with no cracks or chips, are oxidised, have irregularities and imperfections (some with attached concrete residue) as can be expected from items around 140 years old.

If unclear or unsure about anything, please ask. I have also 4 or 5 with chips to bottom of side edges that if use showing face only will not be seen. Can offer these at a reduced price. Weight is 6.3kg per tile so will need to get crated up (# of crates depending on # of tiles) or onto a pallett.

Can also recommend a specialist shipper nearby if need any help with this. Likewise could deliver in/around London if pre arranged. Any questions, let me know. The book is not available on this listing. The item "THE CAFÉ ROYAL 19h Century Industrial vintage cast iron tiles / cocktail book" is in sale since Friday, July 19, 2019. This item is in the category "Antiques\Metalware\Cast Iron". The seller is "streamlinear" and is located in Uxbridge.

This item can be shipped worldwide.